My Misery Is Complete - The Adventures of 'Daggy Man'

Like most folks, I scrub up quite well. Pass me in the street and yes, even though I say so myself, you would think 'Oh, he must be a Corporate Executive'. On the other hand however I do a good impression of a bum, a hobo, a derro, a dag - and far from saying the above you'd find yourself handing me a dollar to go feed myself or buy a cheap bottle of wine. Truth is, there is no in between  - I'm either highly polished or 'Daggy Man'. 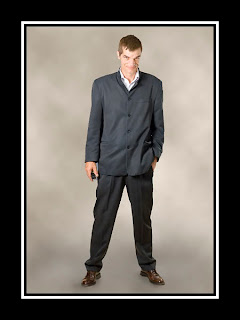 Without the polish this is me... 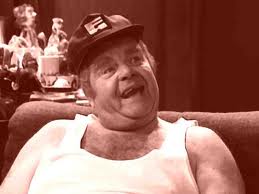 Actually the second picture is not really me - It's a bum of a character called 'Onslow' from a British TV series. But when my wife starts calling me 'Onslow' around the house, I know the slide has to stop...too often recently I've been Onslow.

Now what has this got to do with my Grandmother breaking wind I hear you ask? Or at least you should be, because that's where we're heading just shortly...first however...

You all know we have a Cat and four new kittens at home, you all know that my left arm is a useless, pain filled, Velcro covered mess. It's hard shaving with one hand, you can't pull facial skin tightly to get a good clean shave - and electric razors only serve to make my facial hair longer - they pull at the hair without actually cutting it - less frequent shaving these days - and so the 'Onslow Syndrome' sets in...

Anyway, the Cat and the Dog had their first real spat the other day - Cat went for Dog, Dog went for Cat and I got between them both - I wear my spectacles with a string around my neck - the Dog got a paw in one side of the string, the Cat a claw in the other and hey presto - they snapped the leg and frame of my specs and the lenses flew out.

They were irreparable, or so I thought, enter my daughter Brenna from stage left.
"We've got white sticky tape somewhere. I can wind it round the frame and lenses. Then use a marker pen to colour it black".
I was right - they were irreparable.
And so I sit here today typing this with Joe90 specs on, only they look like a pair made by a kid in Kindergarten. Imagine the image below but made up of coloured-in, taped up specs, and you'll get the idea. 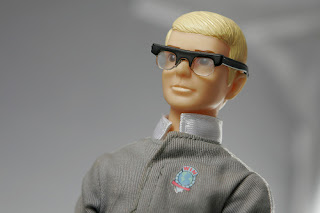 And so I find myself being unable to wear them in public without risking an outbreak of laughter as contagious as swine flu. My misery was complete - or so I thought.

I had to visit the pharmacy for more pills - Spectacles firmly in pocket I strode through the shopping precinct and to all intents and purposes looked like someone who could see where they were going - then it happened. The shame of it still haunts me as I write this.
I involuntarily broke wind.
Now this is something I never, ever, ever, ever do. I'm a Gentleman, I don't break wind in public places or in the company of others. I froze. Hesitantly, I took one more step forward and another ripper let loose. It was synchronized farting - timed perfectly to coincide with each step.  What could I do?
That's when I remembered my dear departed Grandmother. She lived with us and had a dignity and elegance about her which not even breaking wind could dent. Whenever she rose from a chair the loudest, longest fart ever would ensue, the canary would be upturned in its cage, the Dog would have that 'Wasn't me' look on its face, and everyone would look up wondering when it would end. But she carried on with dignity and grace as though nothing had happened. I resolved to do likewise.

And so sounding like someone with squeaky shoes I strode up to the Pharmacy counter to pick up my pills. The girl who works there is a pretty young thing who knows me by name.
"Hi Rory."
"Hi there Elspeth" I said - a little more loudly than usual just to distract her from any other sounds in the vicinity.
Pointing to a fuzzy piece of paper on the desk she said, "All ready, you just have to sign here."
I'd forgotten about the 'signing'. Doing it with one hand was hard enough, doing it with no specs was impossible. I had no choice - I had to pull my specs from my pocket and quickly throw them on with my head tilted downward in the hope she couldn't see.
Something was wrong.
At first I thought maybe it was the sudden change from fuzziness to clarity which was playing havoc with my eyes. And so I looked up to focus on something else to 'correct' my vision. It was then I realised that with two rolls of sticky tape wrapped around my specs I was staring at Elspeth with a bus ticket, a peppermint and a little alien on a key ring all firmly stuck to my spectacles. I quickly signed, grabbed my pills and squeaked my way out the door.

My misery was complete.

I now respond to the name 'Onslow'.

PS - I see the anaesthetist on Tuesday for working out how to knock me out come surgery time - Thanks to my wife who did what I couldn't do -  She hassled the hospital into coming up with a date for my surgery - Jan 30th. It's not ideal but at least it is now a firm date!

Thanks to all who have been writing - will catch up with you today! A real heartfelt thanks as it's been a difficult period.