It's been a crazy week. One which I will try and describe in images. There are creatures everywhere in Australia, and I have no idea what most of them are. My 16-year-old step-daughter in her infinite wisdom however, took the time and trouble to give me the basics when I first arrived here.
"If it has blue on it, it's toxic and will kill you slowly. If it has red, it'll just kill you quickly."

Armed with this knowledge, my faithful friend and I (Banjo my black Labrador), stroll around the garden and I have little fear of what we may encounter, apart from anything else, I have Banjo to protect me. Australia is a tough place to be a dog, it costs over $100 a year for a license just to have one, and the restrictions on their movements in public are pretty tight. At most times they must be on a lead, and rarely are they allowed to run free even in bushland. The penalties for non-compliance are pretty harsh. So if we're not out together somewhere, or my stepdaughter hasn't taken him away to the local dog park, you'll find us in the garden. Ordinarily I ensure the large wooden gate in the garden is locked tight. I have no idea why it was open but it happened to be so earlier in the week when some kind of creature was lurking in the grass at night. I didn't see it, Banjo did and took off like a greyhound after it. Somewhere out there in the darkness he met something fast, heavy and with four wheels. I'm relieved he's alive but damn he's expensive to glue back together again - $700 and that was with a discount for knowing the Vet's Assistant. 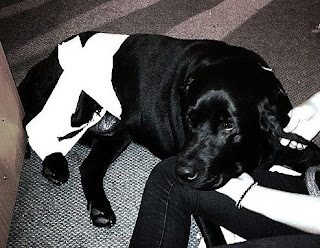 Anyway, he is recovering well, not as well as I would hope, but recovering nonetheless. So my wee strolls around the garden have pretty much been on my own.

Two days ago, I left the house via the front door and made my way around the back intending to come in through there - only to find the back door locked.
' No problem ', thinks I, ' I'll go round the front again'. I turned and was met by the most horrifying guttural hiss. There just a few feet from me was some kind of large reptile which at first I thought was a snake. It reared up and I realised it was as long as a cat but half the height. But anyway, the main focus of my attention was the "kill you slowly" blue tongue - which it flashed every time it hissed. I was trapped between it and a locked door. I picked up a small twig and jabbed it in its direction but it only served to make it angrier. I picked up a small pebble and threw it hoping to scare it away but that only made it rush a few more steps towards me angrily. So this was it then, Rory D Grant was about to be despatched by means of toxic poisoning injected by Godzilla's midget nephew. I slumped down onto my ass with my back against the door so as not to appear too intimidating. I felt the glass door slide open and I tumbled inside. 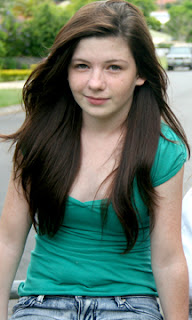 "Watcha doing?" My Stepdaughter asked.
"Thank God Brenna - I was about to be killed slowly by that THING!" I pointed.
"Aww a Blue tongued wizard." (She has a lisp).
She rushed toward it, picked it up and cuddled it.
"No!" I roared "It's dangerous, it's been attacking me!"
"Rory," she said, stroking it in her arms, "They only attack if you are aggressive. Were you throwing sticks or stones at it?"
I thought about that for a second - "Maybe". 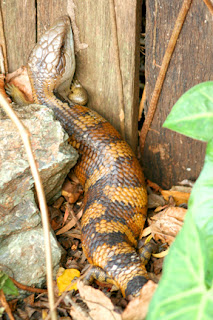 We took it to a secluded tropical area of the garden where I photographed it and let it go.

I need Banjo back on his feet - and soon. Life without him is just too dangerous.