Oh...and did I mention the weather?

I've said it before - I'll say it again, 'Everything in Australia tries to kill you.'

Earlier this year my wife and I were sitting in our office at home, outside it was a gloriously beautiful day, the temperature was up in the 90's. We heard a tapping sound on the roof - we looked at one another and my wife said 'Rain or Possums'.
I wasn't so sure, Possums don't ordinarily run over our roof during daylight and as for rain it looked all clear through the window. The tapping got louder, 'Hmm...' my wife thought out loud 'Hailstones?'. But again all was clear through the window.
Our two Dogs in the garden started barking and the tapping became a roar, yet I could still see nothing through the window. It reached the level of a deafening roar and I raced toward the back to find out what the Dogs were agitated about. I hadn't even reached the back door when I could tell what was going on from the trees I could see through the large glass panels - Twister.

With very little warning huge branches were being thrown across the garden, trees were falling, and as I opened the door, mercifully the Dogs came racing in. It was bad. It was as though night-time had descended in the middle of the day. My wife and I locked ourselves in the Office with the Dogs - not even standing next to a plane engine at full throttle could have matched the roar reverberating all around us. It was truly terrifying. The power went out.  And then, within a few minutes it was all over. The sun shone once more and all was quiet save for neighbours yelling. I went out back to check the damage - the garden was destroyed and the perimeter fence had 'gone'. Trees lay across the yard and had tumbled into the nearest neighbours garden too. Mercifully the house had been spared. Even so it would take months to sort all this out.

Later in the day I grabbed my camera and took a stroll around the neighbourhood. There were cars thrown around like toys, the rain which had fallen in just a few minutes had caused flooding. Our driveway had washed away for the fourth time in five years (still to be repaired even now). The images below are from the kids playpark at the bottom of our street. 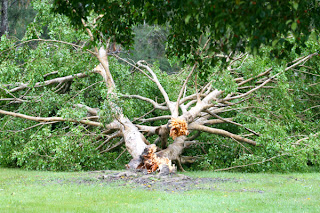 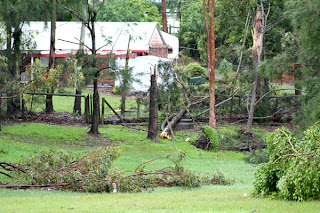 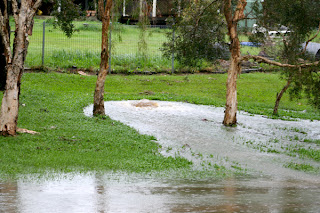 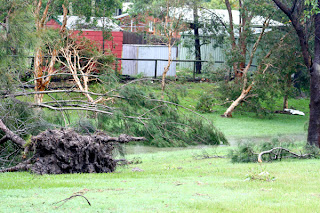 Our little part of suburbia had been torn apart. My most abiding memory from that day though was of sitting out on the porch surveying the damage and thinking overall how 'lucky' we were. I stood up and headed inside and just as I did so a Fruit Bat flew overhead and shit on my head. I think it was a warning not to get too complacent...