Shellfire Smiting Us - The SatSnap Challenge

This is my entry for this week's SatSnap Challenge - The Challenge is that you are given a photograph and must build a 300 word essay, short story or poem around the image. 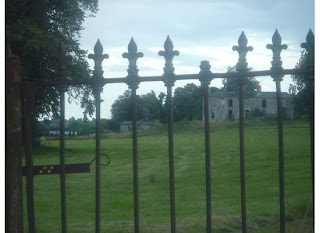 Still owned by the Hogarth's but no longer maintained, the Estate had seen better days. In its heyday it was the pride of the Channel Islands and the comfortable home of the renowned and prolific artist Sir Edward Hogarth. The German invasion of 1940 had put an end to it all. Local legend has it that Sir Edward hastily buried all the family valuables he could gather, within the estate, before the sound of Jackboots could be heard pounding up the driveway. He couldn't stop the looting of everything else of value by the Nazi's however; his own paintings as well as many old masters had been 'requisitioned' and shipped off to Berlin never to be seen again. So utterly destroyed and desolate was he that he could only bring himself to complete one more painting "Shellfire Smiting Us" - a convoy of trucks being shelled in Saint Peter Port - before dying of a broken heart in 1943.  He left no clue as to where the valuables were hidden.
Clutching a scrap of paper his thirty-something great granddaughter Sarah smiled up from the recliner at the only heirloom to have reached her after seventy years.
'Shellfire Smiting Us'
Strangely he had signed this one Ed - rather than his more often used Sir Edward - Now she knew why - and her heart wanted to leap from her chest. Trying hard to compose herself she held the scrap of paper close to her eyes  and reread her own scribbled words...
'Shellfire Smiting Us - Ed'
Minting us Fetishes
The Milling - The files
minting filer
The Missing Files
Filing Missed
The Missing
The Missing Fleur De Lis
"The Missing Fleur De Lis" She said aloud.
Standing up she remembered the old fence running around the perimeter of the estate, she remembered the gate, unable to control herself she let out a scream of joy.
The page for this weeks entries can be found by clicking here - SatSnap
Posted by Rory Grant at 22:58