I'm Genuinely Happy - Two Rights Have Made a Wong!

Forgive me for the title - I couldn't resist. She has the right to live openly and freely with her gay partner. She has the right to IVF treatment from an unknown donor - as a consequence Australian Finance Minister Penny Wong will be mother to a child within her same sex relationship with partner Sophie Allouache. I'd like to congratulate them both whilst pointing out how delighted I am with Australia's non-hysterical, tolerant and respectful attitude towards their news - a respect which is reflected in Australian media. Any coverage of it here has been 'matter-of-fact' with the only public dissent I can see - emanating from folks who would otherwise be stoning wayward wives to death were there not laws against it.

I can imagine the headlines in Britain or the USA if a senior Government official announced the imminent arrival of a child within a same sex relationship. I don't think there would be rioting in the streets but all the old prejudices, all the simmering homophobia would undoubtedly rise to the surface. I'm both delighted and proud of the Australian approach to this issue. It would be foolish and dangerous to suggest that Homophobia is dead in Australia - and of course there's still that little hurdle of gay marriage to address. One would hope it's only a matter of time before sense, justice and compassion prevail. 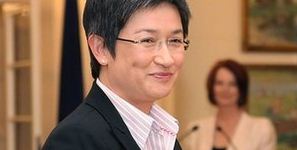 Meanwhile - back in Scotland, the party I supported all my life allowed bigotry and discrimination to raise its ugly head to the extent I almost ripped my kilt off. I hope again that sense and compassion will prevail. Nationalist MSP John Mason has tabled a motion at the Scottish Parliament stating that no person or organisation should be forced to be involved or to approve of same sex marriage. I could write for hours on this subject alone - but I won't. Calling Mr Mason a fool will have to suffice for now. My hand is dead again and I have a garden wilderness out there which on this Sunday is calling to be transformed into a garden of delights. I'm off to brave spiders and snakes armed only with gloves and a Dutch Hoe. That's the gardening implement type of Hoe lest anyone wondered.  :)