Many American readers may not have heard of him. He's been languishing in prison for the best part of a decade. Just this week he was released from prison in Scotland and re-arrested and imprisoned again within 60 seconds. Who is this man, and what deadly threat to the nation or the public at large does he present when life behind bars appears to be his long term fate? His name is Steven Gough - and he wants to get naked. Hence his media coined name 'The Naked Rambler'. 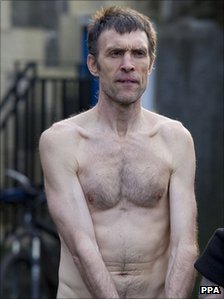 I first saw him with my own eyes as he wandered up the A9 toward Inverness some years ago. I must confess my initial instinct was not to avert my eyes, or rush toward him with clothes, but instead it was to offer him something to eat. Poor fella looked really skinny! Of course that may be a consequence of every Macdonalds in the nation locking their doors when he appears, I don't know, but judging by this picture taken the other day - prison food isn't particularly nourishing either.

I'm not really for or against people running around naked - I even think there's a few places I would do it myself - on a beach for example, where there's very little in the way of jabby things to poke you in the eye. But Mr Gough wants the right to be naked everywhere. It's a tough call.

Now there's a wee bit of a wider issue here with Mr Gough - and one that really does deserve some serious consideration. There are Terrorists who spend less time in jail than he has, in fact, the Lockerbie bomber who was responsible for 270 murders spent less time in prison than he has. Society has to either keep Mr Gough locked up forever and concede that 'being naked' warrants more jail time than mass murderers, rapists and even terrorists or let him have his way. Is being naked really that serious that it merits a life behind bars?

As usual his release and subsequent re-arrest became something of a sideshow. He wasn't permitted to sit down in court until some paper had been found to place on the seat for 'sanitary' reasons. Not only was he charged with being naked out there in public for a whole sixty seconds, but he was immediately charged with contempt of court for appearing naked before the Judge (Which strikes me as a wee bit unfair if his principle defence is his claim to a natural right to be naked).

This problem requires solutions. If not found, then for the rest of his life this man will be in prison and even though I think he's being incredibly stupid, stupidity and nudity in my opinion are not reasons to be deprived of liberty for a lifetime - if it were then Paris Hilton would have been lost to Guantanamo Bay forever.

It needs a solution or solutions folks, I can't think of one - I just don't have one which I think would be a happy compromise. Either the man is allowed to be naked or he rots in Jail for the rest of his life with 60 second glimpses of the outside world every couple of years. Of course I say it needs solutions only because I empathise with his plight for the comparative reasons I stated above - there are those who may very well argue that if he wants his pecker on display and the only bags he's carrying to be those he's born with - then he deserves to be in jail - but for life? He's not backing down. Neither is the law. What to do? What to do?

PS - I just thought of something - Maybe Scotland could lead the world by decreeing that nudity is not 'indecent' if one so chooses - This came to mind particularly as Brad Pitt and Angelina Jolie are currently in Scotland filming a movie. Maybe they could start the ball rolling?

My dear Wife has just read my Blog and offered a compromise - "He's perfectly free to be naked beneath his clothes."