The Day My Dignity Died...

There are many things I left behind in Scotland when I arrived in Australia - I had no idea my dignity would be one of them. I'd been warned that every critter in Australia tries to kill you if you get too close. Quite frankly I would have rather died than endured the humiliation of a few weeks ago.

I've managed to get quite close to some of the more dangerous critters here - and emerged unscathed every time, redback spiders (Black Widow to my American readers) abound in our garden, I've been a few feet from huge snakes - but the general rule really did appear to apply - 'Don't bother them and they won't bother you'. All good as I say, until recently.

Quite what my step daughters and wife thought of the howling Scotsman tripping over himself as he rushed up the hallway in terror, trousers and boxer shorts wrapped around his ankles, screaming 'Help!' I don't know. I'm sure it's a sight which will have been burned into their memories forever - but not for the reasons you're probably thinking - Still, my dignity died that day. I'd just settled on the toilet when 'something' leaped up from the bowl and grabbed my ass. 'Snake' was my first thought, 'Spider' was my second as they are pretty damned big round here, 'I'm dying' was my third thought.  Whatever had a hold of my ass wasn't letting go. I've been told that although all these critters in Australia can kill you, with the exception of sharks obviously, you've got about an hour or two to get the antidote - and even as I ran screaming up the hall I was mentally counting the clock down. My wife and step daughters collapsed in a heap laughing their heads off when I turned to reveal this horror with it's suction cups glued to my ass; 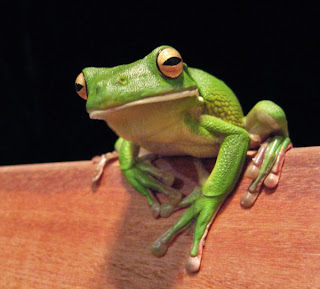 It seems they come up through the water system fairly regularly here. Scared the living bloody daylights out of me and as I say - killed my dignity, stone dead.
And I haven't even mentioned the Bats yet.

In Australia, right outside our house, on the tree overhanging the driveway and the porch, we have Fruit Bats - they are HUGE Bats.
We have a white car - at least that's what colour it is when we go to sleep at night. When we wake in the morning it looks like this...(This is not a picture of our car lest other Bats recognize it and stalk us even more)...

So when we drive off taking the kids to school first thing in the morning - I sit there in our batshitmobile thinking about frogs sticking to my ass and I realise why there are no 'egos' in Australia. No matter where you are, or what you're doing - there's a critter out there watching you, just waiting to put you in your place.