I enjoy dancing in and out of other people's blogs, and to most observers I've probably gathered an absurdly high number of blog writers to 'follow'. Hell I even follow someone because they dislike 'cheap doors'. I follow each one for a very good reason however and it's a reason which unites them all.
Is it the skill of the writer I hear you ask?
'Can be, but not necessarily'  Is my reply.
Is it the content then?
Given that I follow blogs with content as diverse as 'girlie haircuts' and the latest in ladies underwear to 'Let's have a violent revolution and change the world'...no, it's not necessarily the content either.
So what is it?
Well for that to be made clear, we need to go back to a man of whom I was reminded of this very week - Ralph Waldo Emerson. 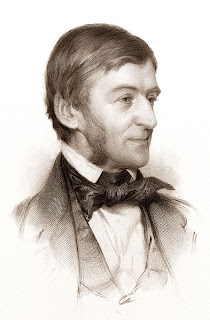 I like Emerson, always have done. More so because at times he infuriates me with his choppy, disjointed, fragmented and downright clumsy sentences, then just as you're about to toss his work to one side - out he comes with a revelation so startlingly simple, so glaringly true, so exquisitely moving, that any prior literary sins are forgiven.

I also like him, because he visited Scotland. Bias I know, but there you are - there's no such thing as true objectivity.

When Emerson set foot on Scottish soil it was to come and pay homage to a man tucked away in a wee cottage known as Craigenputtock Cottage (See below) - Thomas Carlyle. 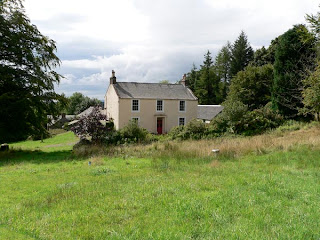 Emerson was unknown in Britain when he 'popped in' to say hello to Carlyle - but by all accounts he caused quite a stir causing Carlyle to later write;


"Our third happiness was the arrival of a certain young unknown friend named Emerson, from Boston, in the United States, who turned aside so far from his British, French, and Italian travels to see me here! He had an introduction from Mill and a Frenchman (Baron d'Eichthal's nephew) whom John knew at Rome. Of course, we could do no other than welcome him; the rather as he seemed to be one of the most lovable creatures in himself we had ever looked on. He stayed till next day with us, and talked and heard to his heart's content, and left us all really sad to part with him."


'BUT WHAT'S THAT GOT TO DO WITH FOLLOWING BLOGGERS?' You are no doubt now screaming...

Well, it's got everything to do with something Carlyle wrote as a consequence of being introduced to Emerson. In 1841 Carlyle wrote to a friend...


"I love Emerson's book, not for its detached opinions, not even for the scheme of the general world he has framed for himself, or any eminence of talent he has expressed that with, but simply because it is his own book; because there is a tone of veracity, an unmistakable air of its being his, and a real utterance of a human soul, not a mere echo of such. I consider it, in that sense, highly remarkable, rare, very rare, in these days of ours. Ach Gott! It is frightful to live among echoes. The few that read the book, I imagine, will get benefit of it. To America, I sometimes say that Emerson, such as he is, seems to me like a kind of New Era."


And there you have it...Every blog I follow, I do so because there are few or no echoes in it. It's really you talking - it's a 'real utterance of  a human soul, not a mere echo of such.'