Out of Time - Warning - Some of this may disturb you.

Apologies but I'm going on a rant this morning - normal service will be resumed as soon as possible.

I'm not a Tree-hugger, but I make no apologies about caring for the environment. I want my children and their children to grow up in the best possible environment.

Like age, the destruction of our environment is something which 'creeps up', it doesn't suddenly arrive with a fanfare - and for decades now it has been inexorably 'creeping up'. There comes a time when we realise and acknowledge 'I'm too old for that now - I simply can't do it' and of course, there's no turning the clock back. So it is with our environment, the destruction is slow but inexorable - as a species we humans are good at confronting immediate problems, but those problems tend to be localised, affecting the people in that vicinity and they respond as one to the perceived threat. But what happens when the threat is global?

THIS PLANET IS DYING! All across the globe the signs of distress are there to see - and therein lies the problem - it is global. What happens in Australia is rarely reported in the USA, what happens in the UK is rarely reported in Australia and on it goes. Countries acknowledge their own problems and the population is left thinking it's a 'little local difficulty' - when in fact it is a disaster of global proportion.

Our oceans and waterways should be seen as the 'blood' coursing through the veins of the global body. Right now it is poisoned in a way which threatens our very existence. This is no 'alarmist' rhetoric, the evidence is there but politically the will to deal with it is lacking. So bad is the situation that Whales are being burned alive in the toxic sludge which passes as 'Ocean' (See below from New Zealand)... 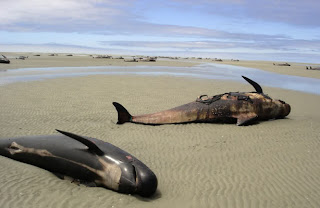 These are not 'isolated incidents' - Everything you read about below is from earlier this year...
Alabama - Tens of thousands of dead 'Spayed Fish' wash ashore.
East Coast USA - Dead Sea Turtles continue to wash ashore - a conservative estimate puts the number at more than 50 times the seasonal average.
East Coast USA - Dead Dolphins was ashore - again conservative estimates are that the numbers are 50 times greater than the seasonal average.
Madagascar - 14 people die from eating Sardines which contained toxins derived from the sea.
Ventura Harbor California - Thousands of dead fish spread across the harbor - scientists say a lack of oxygen 'probable cause' - unlikely to be true as only one species was affected - lack of oxygen would cause all species to show signs of distress.
Vapi, India - Tens of thousands of dead fish wash ashore - the fourth time such an event has happened recently.
Rouge River, Michigan - MILLIONS of fish found dead in the river
California - Sharks dying in large numbers due to 'internal bleeding'
Bangladesh - Tens of thousands of dead Sea Snails wash ashore
Manila - MILLIONS of fish found dead in Lake Taal
Redondo Beach California - MILLIONS of dead anchovies float to the surface
United Kingdom - Thousands of dead Starfish wash ashore
These are just SOME of the dead marine life reports which I gather. There are quite literally hundreds more from this year. Add into this the unusual mass bird deaths, the weird weather phenomena, not to mention quakes caused by "fracking" and it's plain to see - this truly is a Planet in Crisis.
What do we do?
.
Posted by Rory Grant at 13:31